The Wan Chai promenade from Tamar in Admiralty to the Hong Kong Convention and Exhibition Centre further opened today (May 7), adding a child-friendly green space along the Wan Chai waterfront for appreciating Victoria Harbour.

A spokesperson for the Development Bureau said, "The promenade, located on reclaimed land from the Wan Chai Development Phase II project, is one of the 13 works projects under the $6.5 billion dedicated funding for harbourfront enhancement, adopting an incremental approach. The promenade on the waterfront, with a length of about 560 metres and a width of about 6m, was opened in October 2019, connecting the harbourfront area of Central and Wan Chai. It is part of the Victoria Harbour promenade, which has a total length of 5.5 kilometres and is by far the longest promenade in Hong Kong. Since its opening, the promenade has become one of the most popular walking routes between Central and Wan Chai, as well as a popular place for leisure and sports.

The newly opened space of 7 800 square metres is largely a lawn for strolling and playing. The project also provides pavilions with various designs, tables, chairs and topography landscaping, allowing visitors to sit back and relax while enjoying the panoramic view of Victoria Harbour.

The activity area at the end near Tamar Park is designed with a "FunScape" theme. Differing from the common children's playgrounds with mainly fixtures, the "FunScape" approach cultivates a free space for activities by way of horticulture design and undulating grass berms with colourful pipes. The Harbour Office of the Development Bureau recently collaborated with the Playright Children's Play Association to offer children an inclusive play experience as a pop-up initiative at this open lawn setting. The collaboration not only aims at encouraging children to use their imagination to create their own play space and enjoy a creative play journey at the harbourfront area, but also brings new ideas for providing more innovative children's play experiences along the waterfront in the future.

Various interactive installations by noted local artists have been displayed along the promenade as a pop-up initiative in the past. Among them, On Tai Mini Workshop's miniature art piece entitled "Growth from the Earth, Our Home" has become a popular check-in spot at the site. Using the same theme, the designer has created a new art installation named "The Warmest Blessings". Erected on the newly opened lawn area, the new art installation, comprising a magnified vacuum flask and cups in a retro Hong Kong style, creates a living room ambience so that visitors can appreciate Victoria Harbour in a homely atmosphere. The miniature version of the vacuum flask and cups has been exhibited along the waterfront. The designer hopes that the visitors can slow down to look for the miniature forms in their original spots.

A number of sustainable elements have been added to the newly opened area, including a wind-powered lighting system and solar-powered lamps along the walkway. In addition, the Hong Kong Timberbank has made use of trees that fell during typhoons and fabricated a set of public art seats named "A Little Rest in this Tiny Island". The designs of these facilities are not only practical and beautiful, but also environmentally friendly.

Apart from the original three entrances, the new space opened today has three additional entrances to enhance walkability at the harbourfront area, the spokesperson said. The Civil Engineering and Development Department (CEDD) is also constructing a viewing deck across Lung Wo Road and the exit of the Central-Wan Chai Bypass, which would further improve the connectivity between the Wan Chai hinterland and the harbourfront. In addition, the CEDD is planning a shared track for pedestrians and cyclists along the northern shore of Hong Kong Island, which will be implemented from the end of 2021 or early 2022.

The site is accessible from MTR Admiralty Station via Tamar Park, or by walking eight to 10 minutes from the Central Piers or Wan Chai Ferry Pier (see Annex). 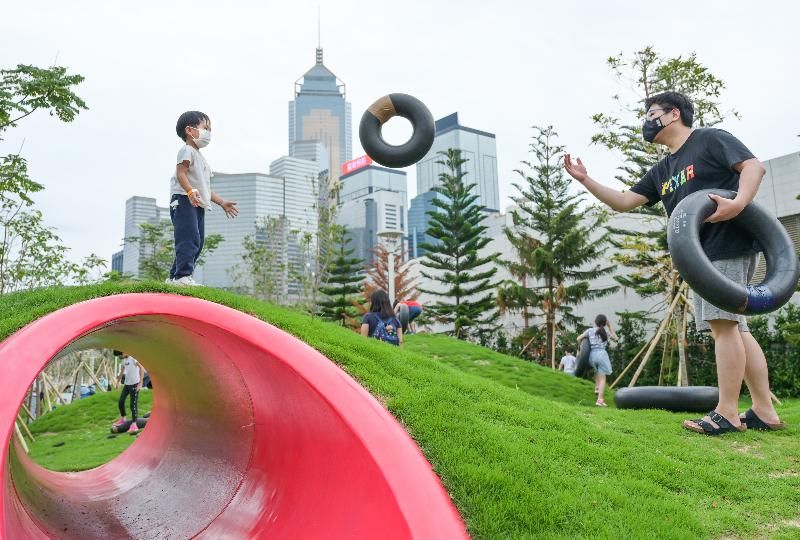 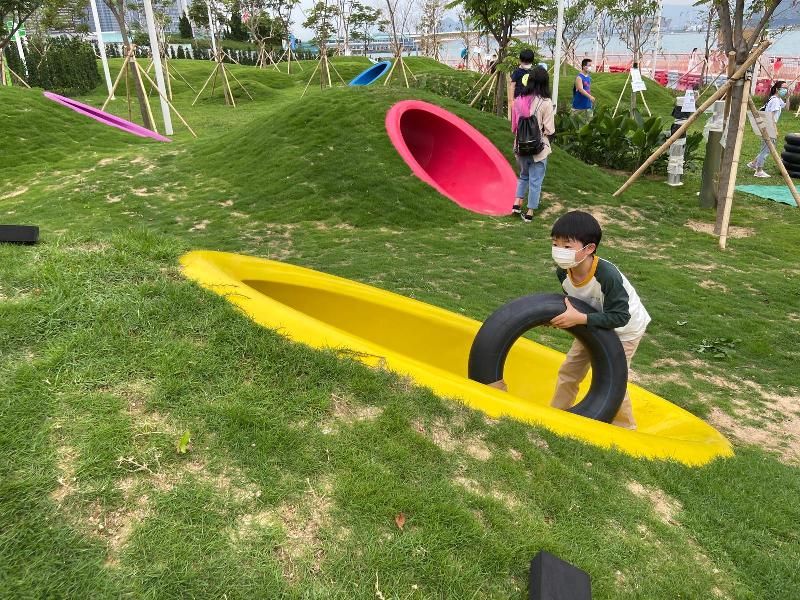 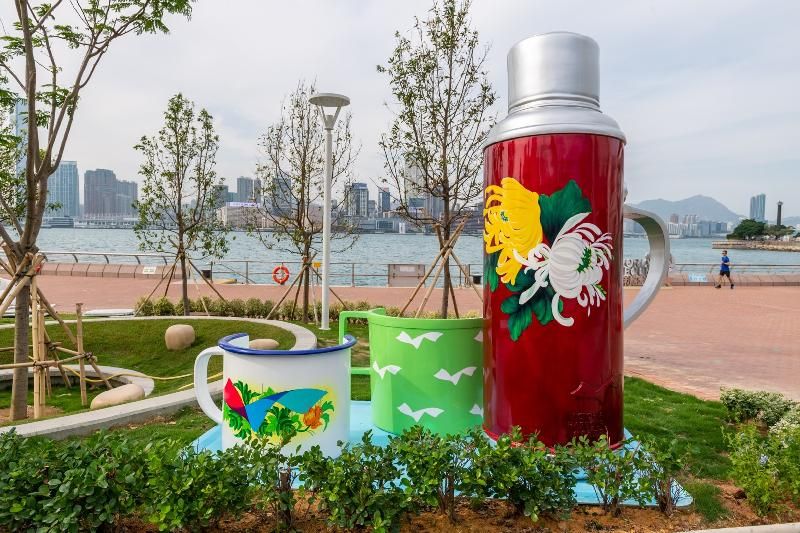 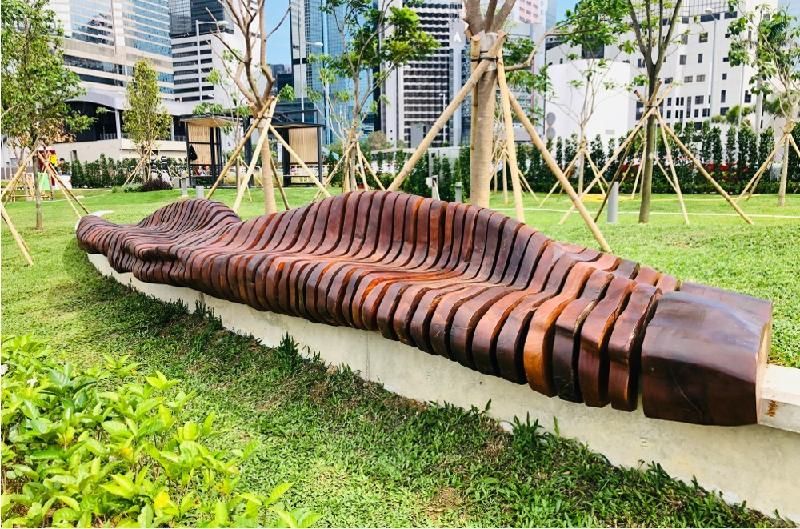 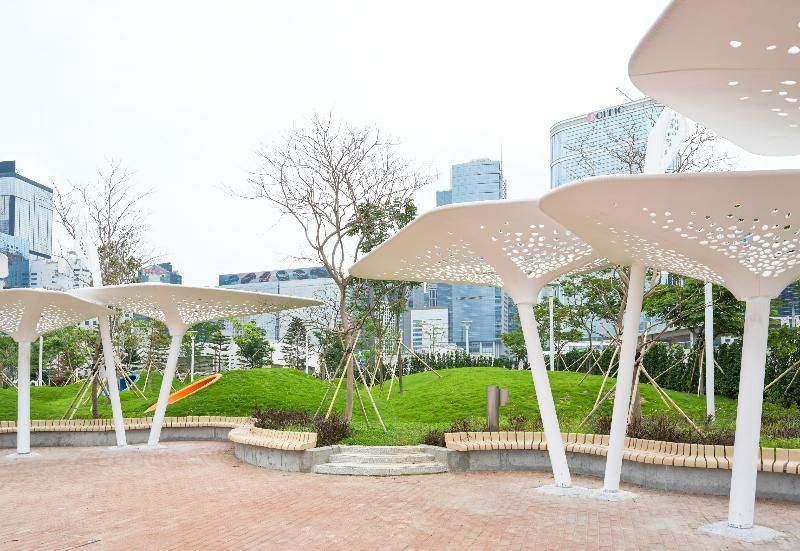 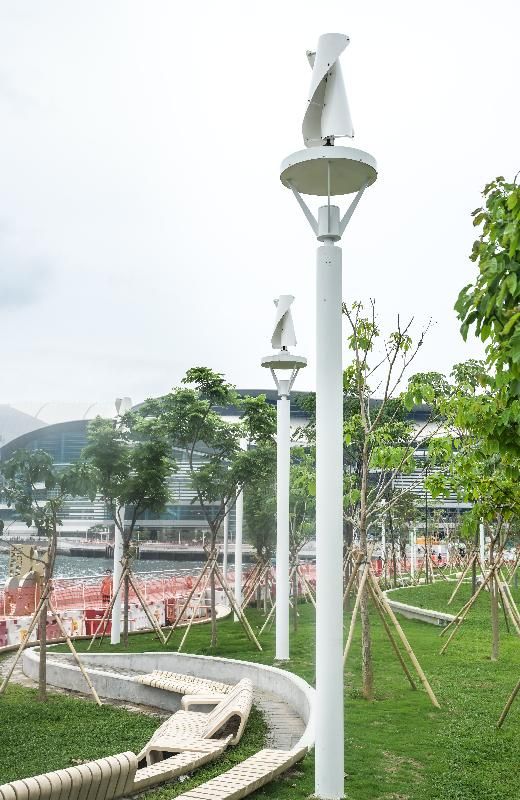