There are four quarries in Hong Kong: Anderson Road, Shek O, Lamma and Lam Tei Quarries. They all produce rock products for the construction industry. These quarries meet about 50% of the local aggregate requirements, in the range of 6 million and 9 million tonnes per annum. The remaining is imported from the Mainland.

Anderson Road, Shek O and Lamma Quarries are working on rehabilitation contracts, which are for fixed time periods with no rights to rock extraction after the expiry of the contract periods. A supplementary agreement has been signed for Lam Tei Quarry which also specifies that the contractor also needs to complete the rock excavation within a definite time.

Quarry rehabilitation contract is essentially a large site formation contract in nature with rehabilitation being the main focus. All quarry contracts are design and build and revenue earning contracts. By revenue earning, it means that the contractor needs to pay the Government for the rights he enjoys under the contract, such as selling or removing rock from site, processing of excavated rock for sale, etc. Using these rights, the contractor generates revenue which is used to cover the cost of the works that he carries out for the Government in association with the contract. Under certain circumstances, the contractor may also be given permissions to do other work, such as manufacture, store and export of emulsion matrix from site.

Anderson Road Quarry is located in the south-western slopes of the Tai Sheung Tok hill at Kowloon Peninsula, covering an area of 86 ha.

The contract was signed in 1997. The works are scheduled to be completed in 2013. The contractor is required to carry out the following works under the contract: 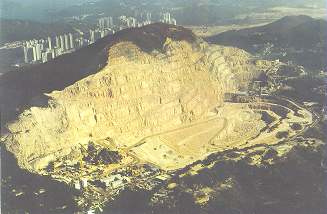 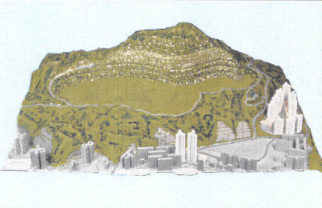 Shek O Quarry is located on the west coast of Cape D'Aguilar Peninsula on Hong Kong Island, covering an area of 45 ha.

The contract was signed in 1993. The works are scheduled to be completed in 2005. The contractor is required to carry out the following works under the contract:

Lamma Quarry is located on the north side of Sok Kwu Wan of Lamma Island covering an area of 49 ha and about 1 km of coastline.

The contract was signed in 1995. The works are scheduled to be completed in 2002. The contractor is required to carry out the following works under the contract:

Lam Tei Quarry is located at about 3 km north of Tuen Mun New Town, covering an area of 30.5 ha. The quarry operation began in 1982 and will complete in 2001. The contractor is required to provide landscaping and planting of approved final landform which is to be created during the contract. The following works are included in the contract: